BoxNation (UK), 2:00 pm EDT, Leonard Bundu vs Frankie Gavin, Lucas Browne vs Andriy Rudenko. Bundu is defending the European welterweight title against Gavin in this one, and given Frankie's talent level and inconsistency, it's a very interesting fight. Plus, Bundu can actually fight a little -- he's no scrub. Browne is an Australian heavyweight starting to make a few waves at age 35, while Rudenko is an unbeaten 30-year-old Ukrainian. BLH will have live coverage.

ESPN2, 9:00 pm EDT, Thomas Williams Jr vs Gabriel Campillo, Andre Dirrell vs TBA. "Top Dogg" has notched four straight solid ladder-climbing wins over Otis Griffin (UD-8), Yusaf Mack (UD-10), Cornelius White (TKO-1), and Enrique Ornelas (KO-3). Former titleholder Campillo is next on that list, and a nice step. Campillo is 35 now, and not the tricky southpaw he used to be -- he still has that boxing knowledge, but it's also been plainly written down that he's a notorious slow starter, and he's vulnerable, too, having been stopped by Sergey Kovalev and Andrzej Fonfara in his last two losses. Williams can punch and doesn't work by the hour. Dirrell is supposedly fighting on this card, but we'll see. BLH will have live coverage. 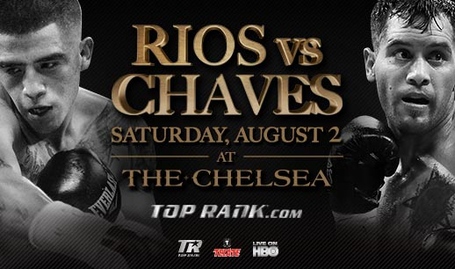 HBO / BoxNation (UK), 9:45 pm EDT, Brandon Rios vs Diego Chaves, Jessie Vargas vs Anton Novikov. Rios-Chaves has fireworks written all over it, and is an on-paper potential FOTY contender. Rios has lost two in a row, and counting the robbery win over Abril, really should have lost three of his last four, but he's been facing top-flight competition, too. Chaves bounced back in February with an easy win in Argentina following his Showtime-televised loss to Keith Thurman, a competitive bout where the Argentine underdog was overpowered in the ninth and 10th rounds, knocked out in the latter. Vargas is making his first title defense against Novikov, a Russian prospect known as "The Pick Hammer." Don't sleep on Novikov here -- he's been outclassing his foes and can really box. BLH will have live coverage. 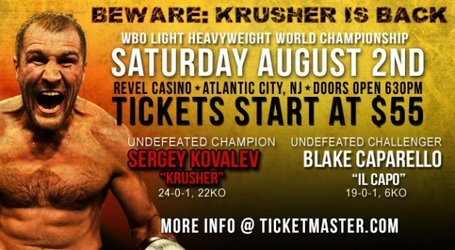 HBO, 9:45 pm EDT, Sergey Kovalev vs Blake Caparello. Caparello is really no danger whatsoever to Kovalev. Though a competent, capable boxer, there's nothing about Caparello's game that is special, and that does not bode well against the powerful, well-schooled "Krusher," who is and should be the prohibitive favorite in this fight. BLH will have live coverage.