It's a busy week for boxing, headlined by Canelo Alvarez's PPV main event against Erislandy Lara on Saturday night. 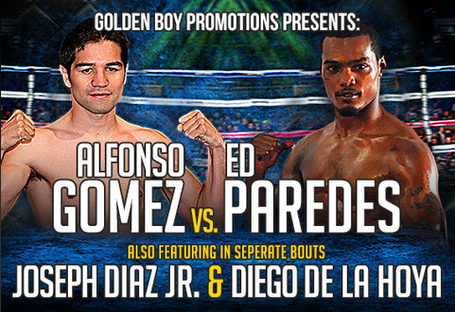 FOX Sports 1, 10:00 pm EDT, Alfonso Gomez vs Ed Paredes. A pair of veterans clash in the junior middleweight main event, as Gomez and Paredes meet to see who ... will win. That's about all I've got. Diaz and Diego De La Hoya are indeed on the card, though neither has a named opponent yet, so, well. BLH will have live coverage.

FOX Sports 1, 10:00 pm EDT, Argenis Mendez vs Rances Barthelemy, Umberto Savigne vs Jeff Lacy. Mendez-Barthelemy is a rematch for Mendez's IBF super featherweight title, which Barthelemy was en route to winning before an after the bell KO after round two. Mendez gets a chance to do better (he couldn't do a lot worse), while Barthemely gets a second crack to pick up his first world title. The co-feature has Jeff Lacy. That Jeff Lacy. BLH will have live coverage.

ESPN2, 9:00 pm EDT, Tureano Johnson vs Mike Gavronski, Art Hovhannisyan vs Jonathan Maicelo. Johnson looks to get back on track following his controversial TKO-10 loss to Curtis Stevens in April, a fight he appeared to have in hand before he was undeniably hurt, though that didn't stop the referee's decision to stop it when he did from being highly questionable. Hovhannisyan-Maicelo is kind of a must-win for both guys. BLH will have live coverage.

Sky Sports (UK), 2:00 pm EDT, Tony Bellew vs Julio Cesar Dos Santos, Nathan Cleverly vs Alejandro Emilio Valori, Callum Smith vs Vladine Biosse, Rocky Fielding vs Noe Gonzalez, Anthony Joshua vs Matt Skelton, Luke Campbell vs Craig Woodruff, Anthony Ogogo vs Wayne Reed. This card is packed in the way that a bunch of mismatches with names can be a packed card, so Golden Boy-packed, For the Fans. Bellew and Cleverly are, as the poster says, on a collision course for a cruiserweight rematch later this year. Probably, anyway. Or maybe it's a maybe. But that is the plan. Smith and Fielding are in against solid opponents for their levels, and so is Joshua, who looks to pick up the biggest win of his career, though it's of course worth noting that Skelton is 47 years old, semi-retired, and the last time he was in with a puncher, David Price got him in two rounds. Campbell and Ogogo are staying busy and getting some experience, as they should be. As for the main two bouts, Cleverly is taking his usual softie opponent, while Bellew faces a 36-year-old Brazilian who does have a nice KO ratio (26-2, 23 KO) and has never been stopped, so I guess his is the better fight. BLH will have live coverage.

SHO, 7:30 pm EDT, Tomoki Kameda vs Pungluang Sor Singyu. Showtime's red carpet preview show starts 90 minutes before the main fights on pay-per-view, and we'll get a live world title fight, in what might really be the best undercard matchup of the show. Tomoki is the youngest of the fighting Kameda brothers, and to my eye, he's the best overall package in the ring. Pungluang is no pushover, though. This one is intriguing and well worth tuning in early to see. BLH will have live coverage.

SHO PPV / Televisa (MEX) / BoxNation (UK) / Main Event PPV (AUS), 9:00 pm EDT, Canelo Alvarez vs Erislandy Lara, Juan Manuel Lopez vs Francisco Vargas, Abner Mares vs Jonathan Oquendo, Mauricio Herrera vs Johan Perez. And then there's the week's "Big One," as Canelo Alvarez faces a stern challenge from Cuban southpaw Erislandy Lara. This is once again Canelo defying what has been expected of him, and taking on the guy perceived as the biggest danger to his stardom. He did it against Austin Trout, then he fought Mayweather, and now he's facing Lara. The kid has no fear, and this is a great matchup. Lopez-Vargas is a solid undercard bout, while Mares-Oquendo could be action-packed, and Herrera-Perez is fine, too. Good card. BLH will have live coverage.