Brook vs Porter Breakdown: The Mechanics of a Messy Fight

Share All sharing options for: Brook vs Porter Breakdown: The Mechanics of a Messy Fight

Sometimes you'll hear the word "ugly" being used positively in boxing circles. "He needs to make it ugly to win," an analyst will say, describing the less technical but more mental style that many of the sports toughest fighters adopt. Used this way, the word is not a criticism so much as an endearing description of a gutsy style.

I say all of this to underline that, when I describe Kell Brook vs Shawn Porter as an ugly fight, the word is not complimentary.

As much as I love an underdog victory, there was very little in the way of good boxing from either Shawn Porter or Kell Brook. This is especially disappointing for Brook who, as a product of the storied Ingle Gym in Sheffeild, England, occupies a place in one of the sport's most technical and entertaining lineages. Suffice it to say that Brook did not live up to the level of his predecessors, and Shawn Porter did not do enough to beat him.

Today we're going to explore the mechanics of the fight to understand why neither man was able to look impressive against the other in a bout that failed to live up to expectations.

As happy as I am that Dominick Ingle is keeping his father's lineage alive, it's hard to avoid the feeling that he just doesn't understand the nuances of the system the way Brendan did. Ingle the elder crafted some of modern boxing's best technicians, proving in the process that punching power can indeed be taught, and that a fighter can hang his hands around his hips and still be defensively sound. This new generation of Ingle Gym fighters, however, don't characterize the tenets of the system at all. They possess some of the trappings of Brendan Ingle's style, but their movements betray a lack of understanding of what makes the system work.

Kell Brook's stance exemplifies this dichotomy between the Ingle fighters of today, and the masters of old. 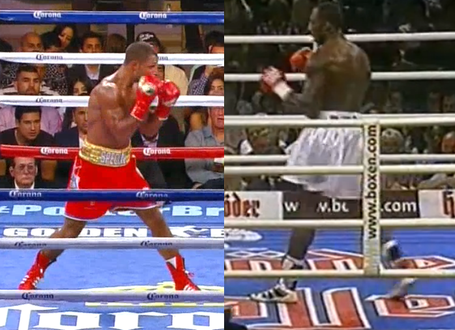 Here we have Brook, on the left, opposite one of Brendan Ingle's greatest students, 13-time WBO Cruiserweight champion Johnny Nelson. The similarities between the stances of these two men are evident. Both Brook and Nelson stand with their weight forward, left heel down and right heel up. Their heads are slightly forward, and their shoulders squared.

This is a familiar position for Ingle fighters, but I'll let Nelson demonstrate the purpose of the pose.

Nelson's right heel is raised to facilitate movement in the direction of that foot. When his opponent, Rüdiger May, throws a jab at him, Nelson is instantly able to move his rear foot back, pulling his head out of range and countering with a sharp jab of his own. For Brendan Ingle's fighters, the forward starting position was a trap. With the back foot placed behind the body and ready to move, Ingle's boxers could use their apparently wide-open heads to bait their opponents and walk them into counters.

Ingle's system is designed to give his fighters maximum leverage, and allow them maximum manipulation of distance. As such, this head-forward position is just one of many positions, all adopted with a particular movement or attack in mind. In other words, everything leads to something else. Ideally, no attack or movement is executed in such a way that another attack or movement cannot immediately follow.

The following video features another Ingle standout, Herol "Bomber" Graham, widely considered one of the best fighters in history never to win a world title, explaining the concept of preemptively creating space in order to move and counter an opponent.

If you're interested in hearing a cerebral boxer explain a key facet of his style, this video is definitely worth a watch, but for the lazy and short-for-time, Graham's point can be summed up as: "the rear foot moves back so that the body can shift over it." In other words, Ingle fighters are supposed to be able to rock back and forth between their feet, creating space where there appears to be none, even without moving their feet.

Unfortunately, the head-forward position was not one among many for Brook. Instead of adopting the best position for the situation, Brook seemed incapable of standing without his head forward and his weight fixated over his left foot. Even worse, when threatened he was consistently unable to pull back onto his rear leg, and tended instead to swat ineffectually at punches and attempt desperate, improvised head movement.

Note that when Brook overcommits on his jab, he is forced to defend until Porter simply decides to stop punching. Ducking his head and covering up, Brook's right foot remains sticking out to his rear. And where Herol Graham or Johnny Nelson would have shifted their weight back onto that foot, Brook is at a loss for how to get out of range of Porter's punches. He's stuck over his lead foot, and that's a bad place to be as a counter puncher.

Another major drawback of Brook's default position is that he consistently falls in with his strikes. With the majority of his bodyweight already positioned over the lead foot, Brook can't send a weighted punch forward without his head drifting past his own feet and right into enemy territory. Brook's strongest attribute is his timing, so he was able to land frequently, but even then his bad habit can be seen.

Landing a right hand on Porter, Brook's body falls forward so dramatically that his rear foot completely leaves the ground, drifting forward until Brook is almost completely square to his opponent. Brook manages to roll under Porter's counter left hook, and the roll is indeed a sound defensive option after a right hand. The problem is that Brook has no choice but to roll after throwing his cross. He is incapable of quickly pulling back to his right foot, which would be impossible since, during the punch, his foot isn't even on the ground. Brook's only option is to duck his head and hope that Porter doesn't throw an uppercut.

Here's another example, in which Brook runs face-first into a jab while throwing his right hand. Despite landing his punch very cleanly, he is forced to reset entirely before he is able to punch again and pivot out of the corner. The flow from one position to the next that marked the Ingle fighters of old is all but entirely absent from Brook's game.

The problem is worse when Brook's punch misses the target. With nothing to stop the inertia of his straight punches, Brook continually fell into the shorter-armed Porter's range, where he could do nothing but hold and wait for the referee to help.

Watching this GIF, keep in mind that the jab is meant to be the safest punch that one can throw, requiring virtually no commitment of bodyweight to be effective. For Brook against Porter, however, a missed jab was a narrowly-averted catastrophe at best. Here, Porter slips inside Brook's jab and Brook slides uncontrollably into Porter's punches. The inside game was where Porter expected to do his best work, but the only thing saving Brook from serious punishment here is Porter's own inability to control the distance. If, instead of barreling into Brook's chest, Porter had taken a tiny step back off of his slip, Brook would have been incapable of avoiding his punches. As it was, Porter smothered his own work by standing too close to Brook, even as Brook offered him opportunity after opportunity by careening headlong into Porter's range.

I realize that I may sound like a bit of a sourpuss with this assessment, but it's difficult to watch a fighter out of one of England's best gyms turn in such an underwhelming performance. Perhaps my doomsaying is all for naught and this was simply an uncharacteristic performance from Brook--he wouldn't be the first person that Shawn Porter made to look unimpressive. Watching Brook's other fights, however, one does not get the sense that he knows the ins and outs of the Ingle system the way that Brendan's earlier fighters did.