AWE / BoxNation (UK), 2:00 pm EDT, Kiko Martinez vs Carl Frampton, Eamonn O'Kne vs Virgilijus Stapulionis, Jamie Conlan vs Daryl Basadre. The best news about the Klitschko-Pulev cancellation is we'll get to pay full attention to what likely will be a better fight, as Frampton looks to pick up his first world title in a rematch with Martinez in Belfast. The undercard is the usual nothing. BLH will have live coverage.

SHO, 9:25 pm EDT, Adrien Broner vs Emmanuel Taylor, Lucas Matthysse vs Roberto Ortiz, Andre Berto vs Steve Upsher Chambers. None of these fights are seen as truly legitimate tests for any of the A-side fighters, as this is another Haymon-fueled Showtime Showcase. Broner had an easy night in May against Carlos Molina after his first pro loss to Marcos Maidana in December 2013, and Taylor is a step up from Molina, though closer to the level that Broner was being criticized for facing before his loss than he is to Maidana or another top fighter. Taylor can fight, but on paper, Broner should win this one going away. Of course, that depends on how good Broner actually is, I guess. Matthysse-Ortiz should be a trucking, while Berto is in understandably soft coming off of a year out of the ring due to shoulder surgery. BLH will have live coverage. 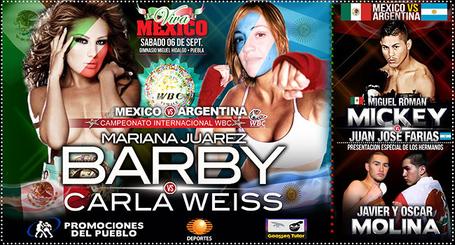 Azteca (MEX), 11:30 pm EDT, Juan Francisco Estrada vs Giovani Segura, Jackie Nava vs Alicia Ashley. It's a very good main event, and supposedly beIN Espanol will have the fights, too, though those will be on delay.

UniMas, Midnight EDT, Juan Diaz vs Carlos Cardenas, Brad Solomon vs Freddy Hernandez, Egor Mekhontsev vs Samuel Miller. Baby Bull Diaz continues his tepid comeback, with his fifth straight small card soft touch. It's enough to wonder if he's really seriously back in the sport, or just making a little coin beating up guys he knows he can beat up. Solomon-Hernandez is a decent matchup, and Mekhontsev is a real prospect.