Victor Ortiz says he'll return to the ring in November

Victor Ortiz says he's coming back in November. Is there anything left in the former welterweight titlist?

Share All sharing options for: Victor Ortiz says he'll return to the ring in November

Victor Ortiz said via his Instagram page earlier today that he'll be back in the boxing ring in November, as he looks to break a three-fight losing streak and get his career back on track. 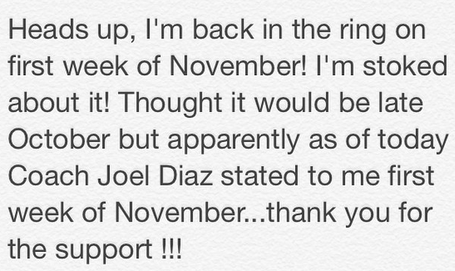 Ortiz, 27, hasn't won a fight in over three years now, starting with his infamous loss to Floyd Mayweather in September 2011. After that, he lost fights to Josesito Lopez, when he was stopped after nine due to a broken jaw in June 2012, and then his comeback in January of this year, knocked out by Luis Collazo in three rounds.

Ortiz (29-5-2, 22 KO) didn't look like he really wanted to be there against Collazo, a crafty and solid veteran, to be sure, but also hardly a puncher. As soon as Collazo landed a good, clean shot, it looked like Ortiz sort of folded. The question is whether or not he's prepared to take shots anymore, and if he's got the right state of mind at this point to be a professional boxer.

Of course, he could also just try to make a living fighting creampuff-type opponents, which is what Juan Diaz has been doing in his boxing comeback, for instance.

Do you think Ortiz has a future left at the higher levels in boxing, or is he done mentally if not physically?