There are multiple world title fights and a crossroads clash in Canada coming this weekend.

Share All sharing options for: Beterbiev vs Cloud, Abraham vs Smith, Wlodarczyk vs Drozd, more: Boxing TV schedule and fight times for Sept. 26-27 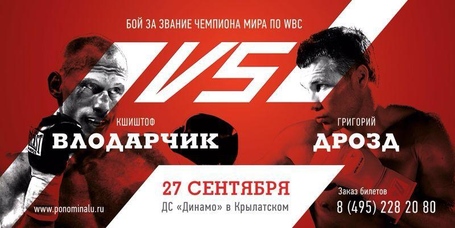 PPV ($24.99-34.99), 12:00 pm EDT, Krzysztof Wlodarczyk vs Grigory Drozd, Denis Lebedev vs Pawel Kolodziej, Svetlana Kulakova vs Ana Laura Esteche, Andrey Knyazev vs Shalva Jomardashvili. Integrated Sports has picked this show up for a pay-per-view broadcast in the States, which is nice. The two cruiserweight title fights in the main events are pretty interesting, though, with Lebedev perhaps most vulnerable given his inactivity and the beating he suffered against Guillermo Jones in his last fight, an official loss even though the belt was returned to Lebedev after multiple failed drug tests from Jones after that fight and ahead of their canceled rematch. BLH will have live coverage.

Sky Sports 2 (UK), 3:30 EDT, Arthur Abraham vs Paul Smith. Part of this will overlap the Integrated PPV, which has a run window from Noon to 5 pm EDT, but the main event will come after. This isn't a particularly good title defense for Abraham, which is a nice way of saying it's a pretty bad title defense, as Smith is not a serious contender. BLH will have live coverage.

BoxNation (UK), 7:00 EDT, Artur Beterbiev vs Tavoris Cloud, Dierry Jean vs Daniel Ruiz, Antonin Decarie vs Ivan Pereyra, Kevin Bizier vs Laszlo Fazekas. BoxNation has picked this one up, which is great, because it gives us all a thing to watch on an otherwise pretty empty Saturday night. Beterbiev is a great prospect with an Olympic pedigree, losing in the second round in London to eventual gold medalist Oleksandr Usyk. That said, this is just his sixth pro fight. Cloud, a former titleholder, is on a bad run, with two straight losses that should have included a third to Gabriel Campillo. HIs last legit win came in 2011 against Yusaf Mack. But he's been in the ring with very good and great pro fighters. BLH will have live coverage.

beIN Sports Espanol / Azteca (MEX), 11:00 pm EDT, Omar Chavez vs Ramon Alvarez. Chavez is the younger, less talented brother of Julio Cesar Chavez Jr, nicknamed "The Businessman," which might actually be the worst nickname in boxing history, though it does reflect what his career represents.