Jhonny Gonzalez returns to defend his belt against Jorge Arce, Rances Barthelemy takes on Fernando Saucedo on Showtime, Hassan N'Dam and Curtis Stevens fight for a title shot, and more. 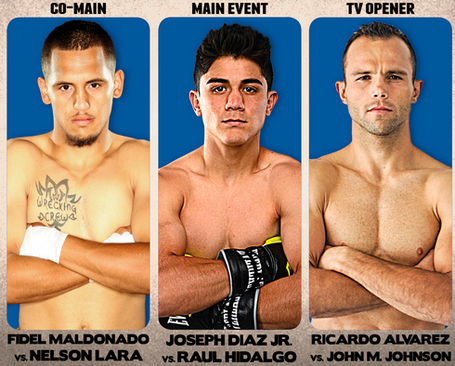 FOX Sports 1, 10:00 pm EDT, Joseph Diaz Jr vs Raul Hidalgo, Fidel Maldonado Jr vs Nelson Lara, Ricardo Alvarez vs John Michael Johnson. This card was supposed to be headlined by Antonio Tarver vs Johnathon Banks, but Tarver was hurt in training. That's OK -- I can't imagine too many people terribly invested in what an ancient Tarver's future holds at middleweight against an also-ran, so in the end, this card is just about as good. Of course, Tarver's future at heavyweight is as legit as the actual future of Canelo's brother Ricardo, but then that's another story. BLH will have live coverage. 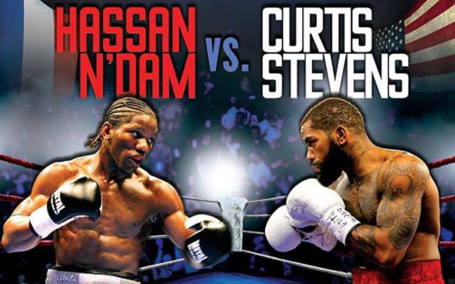 ESPN2, 9:00 pm EDT, Hassan N'Dam vs Curtis Stevens, Maxim Vlasov vs Isiah Thomas, Fredrick Lawson vs Ray Narh. The main event is an IBF middleweight title eliminator, with the winner in line to face the following week's Sam Soliman-Jermain Taylor victor. The idea that we could possibly see Jermain Taylor vs Curtis Stevens is a little frightening. N'Dam and Stevens are about 50-50 here, I'd say, and it's a nice matchup, well worth a Wednesday night tune-in. BLH will have live coverage. 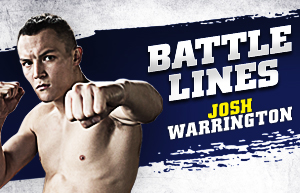 Sky Sports 2 (UK), 3:30 pm EDT, Josh Warrington vs Davide Dieli, Tyrone Nurse vs Dave Ryan, Ricky Burns vs TBA, Brian Rose vs TBA, Callum Smith vs TBA. Unbeaten Warrington (18-0, 2 KO) is looking to gain the vacant European featherweight title against Italy's Dieli (15-3, 5 KO). Dieli is a 35-year-old guy who's been spending his time fighting six-rounders the last couple of years -- this is one of those vacant European title fights that UK promoters specialize in, where they get to match their guy against some aging, often undersized, never-really-a-player-even-at-this-level fighter from Italy or Spain or France or Hungary or whatever, and then go, "WOW! European champion!" Matchroom are currently doing this with Scott Quigg but calling it a world title. BLH will have live coverage. 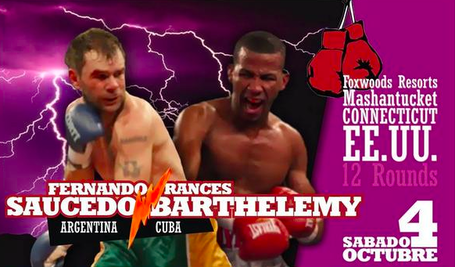 SHO, 9:00 pm EDT, Rances Barthelemy vs Fernando Saucedo, Vanes Martirosyan vs Willie Nelson, Chad Dawson vs Tommy Karpency, Dominic Wade vs KeAndrae Leatherwood. It's not a card likely to get anyone's knickers all excited or whatever, but Barthelemy-Saucedo and Martirosyan-Nelson are legitimate fights, at least, and Wade is a solid prospect looking to keep moving forward. Dawson-Karpency is trash but that's life. And at least SHO has beaten HBO back to the airwaves for the fall. BLH will have live coverage. 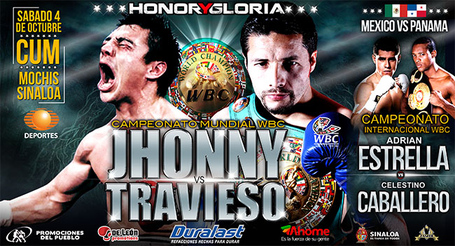 beIN Sports Espanol / Televisa (MEX), 11:00 pm EDT, Jhonny Gonzalez vs Jorge Arce, Adrian Estrella vs Celestino Caballero. Gonzalez-Arce is going to go one of two ways, and I doubt there's any in-between in this. Either Gonzalez brutally beats down Arce within 3-4 rounds, and it looks like the farce many fear, or Travieso defies time and logic once again and makes a fight of this thing. Gonzalez is hardly invincible himself, and he's known to have a vulnerable chin. The co-feature here is pretty good, too, as big punching prospect Estrella (18-0, 17 KO) looks to make a mark against Caballero, following a career-best win over Dante "Crazy" Jardon in July. BLH will have live coverage.

UniMas, Midnight EDT, Felix Verdejo vs Sergio Villanueva, Gamalier Rodriguez vs Martin Gonzalez, Esquiva Falcao vs Austin Marcum. It's a Solo Boxeo show headlined by Felix Verdejo, who looks like a real deal prospect. The jury is out on Esquiva Falcao so far, however. BLH will have live coverage.