Mayweather vs Maidana and more: Boxing TV fight times and schedule for September 11-13

Floyd Mayweather rematches Marcos Maidana in the biggest fight of the week, and maybe of the year, this Saturday night on PPV.

Share All sharing options for: Mayweather vs Maidana and more: Boxing TV fight times and schedule for September 11-13 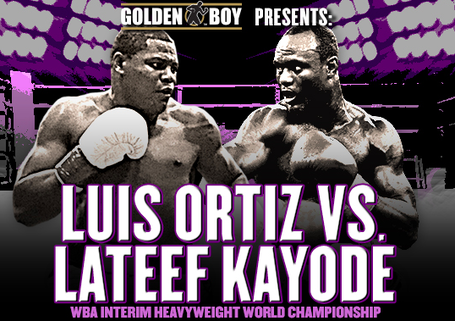 FOX Sports 1, 9:30 pm EDT, Luis Ortiz vs Lateef Kayode, Juan Manuel Lopez vs Jesus Cuellar. The main event is a decent heavyweight matchup of sorts, which will probably result in a dreadfully boring fight. The main joke here is that the WBA has decided Ortiz-Kayode needs to be for an interim title. They already have an active super champion (Wladimir Klitschko) and an active world champion (Ruslan Chagaev), but sure, interim title. Why not? These two will give them money for it, because then they get a ranking with a win. It's about a lot more than the belt, but the system is busted and corrupt either way. ANYWAY, though, Lopez is back in the co-feature, and he's always fun. BLH will have live coverage.

Sky Sports (UK), 3:00 pm EDT, Scott Quigg vs Stephane Jamoye, Anthony Crolla vs Gamaliel Diaz, Anthony Joshua vs Konstantin Airich. Quigg was originally supposed to face Paulus Ambunda, but instead it's Jamoye, subbed in as an injury replacement. It's not much worse a fight, if at all. Joshua takes on Airich, which with a predictable win (Airich is really not good) sets up his scheduled October 11 fight with Denis Bakhtov, who just beat Airich, too. BLH will have live coverage.

SHO, 7:00 pm EDT, John Molina vs Humberto Soto. In what may be the actual best undercard fight of the night, John Molina faces Humberto Soto as part of the hour-long Mayweather-Maidana 2 countdown show on Showtime. BLH will have live coverage.

SHO PPV / BoxNation (UK) / Main Event PPV (Australia) / Sky Arena (NZ), 8:00 pm EDT, Floyd Mayweather vs Marcos Maidana, Leo Santa Cruz vs Manuel Roman, Miguel Vazquez vs Mickey Bey, Alfredo Angulo vs James De La Rosa. The undercard is the sort that would get Bob Arum flamed for weeks if not months, but since it's not Arum, this one apparently gets a pass. And it's not that bad. There's a world title fight, though it does feature Vazquez and Bey, both boring fighters, one of them not a real contender to begin with. Angulo and Santa Cruz are always fun, but neither of these fights should be tests, unless Angulo is shot. But the main event is genuinely worth the money. The first fight was good, and we'll have to find out if Mayweather can actually make this as easy as he claims he can, or if those legs are just too old to evade the relentless Maidana entirely. BLH will have live coverage.